The force with which a spring pulls back when stretched (or pushes back when compressed) is proportional to the amount of stretch from equilibrium, provided the spring is not stretched too far. Historically, this linear proportionality between the force and amount of stretch is referred to as Hooke’s Law behavior, which is true if the mass of the spring is negligible. We write the restoring force as:

where k is the “spring constant” or “force constant” (and depends on the stiffness of the particular spring), and x is the displacement from equilibrium. The minus sign indicates that the force is the opposite direction to the direction the spring was stretched or compressed. In other words, if you are applying a force on the spring-mass that displaces it from equilibrium, the restoring force will act in the opposite direction of the applied force. An important point to notice in the expression for the force of the spring is that x is measured from the un-stretched position of the free end of the spring.

In order for the force to have units of newtons, the units of k must be newtons per meter (N/m). The force that you (an external agent) have to exert on the spring to stretch it a distance \(x\) is in the opposite direction to the restoring force and is equal to \(F_{applied}=+k x\).

Hooke's Law breaks down at the extremes of a spring's motion. For example, when stretched to the point of breaking or permanent deformation, a spring's behavior will begin to deviate substantially from the linear expectation. Also, when compressed so far that it begins to touch itself, and the forces at play change. For these reasons, it is usually assumed that springs stretch only within a small portion of their maximum deformation. The restoring force, \(F = -kx\), is not constant since it depends on displacement x. That is, the force is proportional to the distance the spring has been pushed or pulled. So we can no longer used the simplified version of work, but will use the general Equation 2.3.1 for work. The applied force does work when the spring is stretched from distance of zero to a max of d, in this example. Thus, the work done on this system:

Notice that while the force scales linearly with deformation, the work required to deform the spring scales as the square of deformation. This also confirms that the potential energy will depend on the magnitude of the displacement only, and not the direction. Using the energy-conservation equation from Figure 2.5.2 we get \(\Delta PE_{sm}= \dfrac{1}{2}kd^{2}\). Generally, the spring-mass potential energy is given by:

A spring of negligible mass and a spring constant of 120 N/m is fixed to a wall and is free to oscillate. On the other end, a ball with a mass of 1.5 kg is attached. The spring-mass is then stretched 0.4 m and released.

a) What is the maximum speed of the attached ball? Neglect any effects of friction.

a) Let us focus on the interval once the ball is released until it is at equilibrium when the speed is maximum.The spring-mass system is closed since it is not interacting with other systems in this interval. As the spring-mass oscillates potential and the kinetic energies change, \(\Delta E_{tot}= \Delta PE_{sm}+\Delta KE=0\). The Energy-Interaction Diagram for this process is shown below: The equation can be rewritten as:

Solving for \(d_{max}\), we find the maximum displacement after 4 oscillations to be 0.16m.

A spring with a mass hanging down acts exactly like a horizontal spring, except that the end of the spring has a different equilibrium position. For a vertically hanging spring-mass there are two forces acting on the mass as it oscillates: the force from the spring pulling up or pushing down, and the force from the Earth always pulling down. Let us take a closer look why the horizontal and vertical spring-mass systems can still be treated identically.

For the vertical spring (as for the horizontal one), the force with which a spring-mass pulls back when stretched (or pushes back when compressed) is proportional to the amount of stretch from the equilibrium determined with the mass attached (provided the spring is not stretched too far). For a vertical spring, we will usually write the restoring force using the symbol “y” instead of with an “x”, but this is just a convention:

Similarly to the horizontally attached spring in Example 2.5.1, let us analyze a situation of finding the maximum speed of the mass at equilibrium. In the example, we found the following general equation for an interval when the mass is released from maximum displacement to its equilibrium position, assuming thermal dissipation is negligible:

Let us now see what we get for a vertical spring given the same interval. We will start by measuring the potential energy of this system from (y=0) in the figure below, the equilibrium position of the spring without the mass attached. 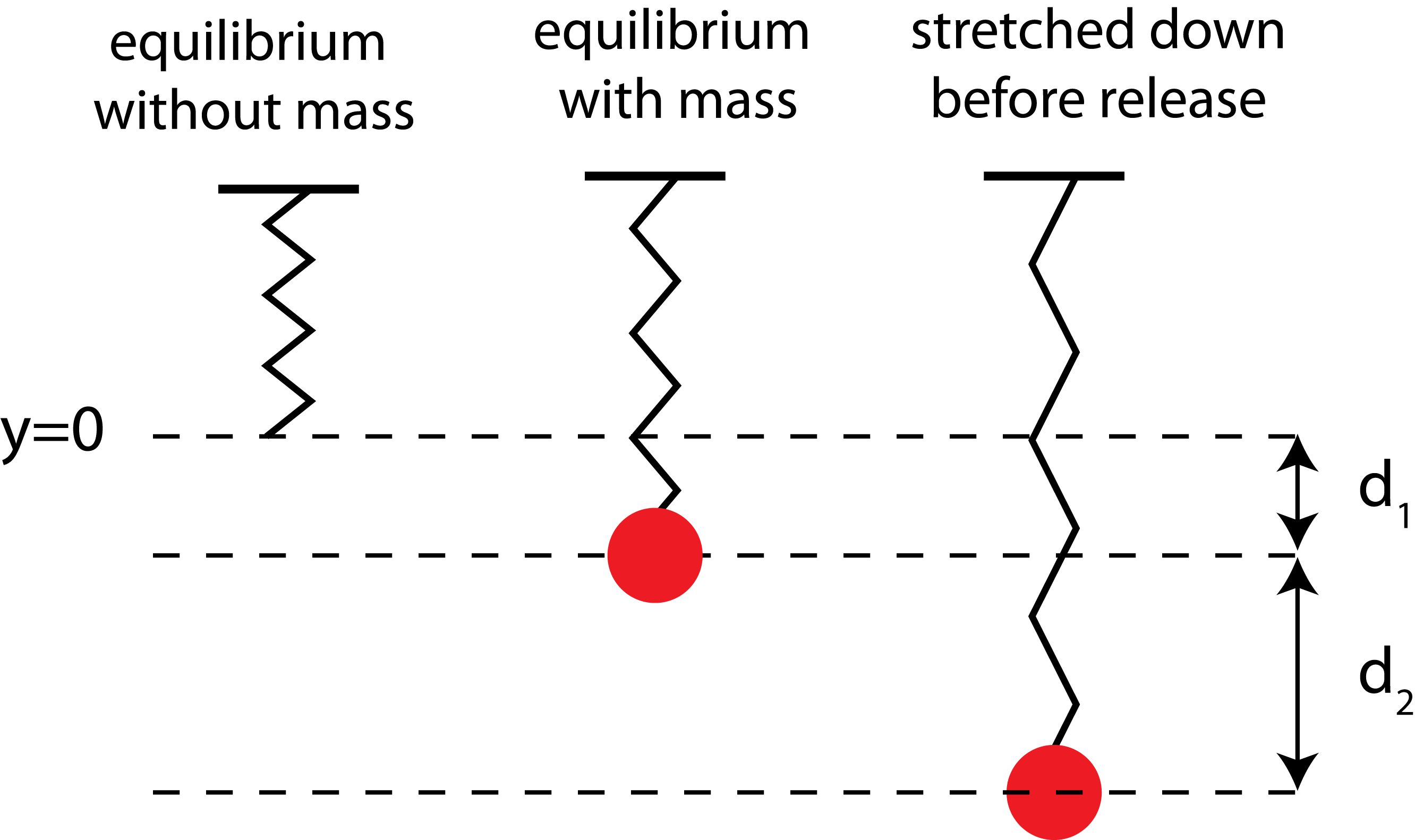 When the mass is initially attached it stretches by a distance \(d_1\) to a new spring-mass equilibrium. At this position the spring-mass is not moving, so the forces acting on it must be balanced. That is, the gravitation force must be equal and opposite to the spring-mass restoring force:

The spring-mass is then stretched another distance \(d_2\), released, and allowed to oscillate. Recall, all the vertical heights used in calculating PEg are measured from the y=0 defined in Figure 2.5.3. Thus, the values of y for the equilibrium and stretched positions (center and right configurations in the figure) will be negative. The Energy-Interaction Diagram for calculating the maximum speed when the spring-mass returns back to equilibrium after release is shown in the figure below. Expanding the equation from the Energy-Interaction diagram and plugging in the variables for the energy indicators:

Using Equation \ref{forces.vertical.SM} for d1, the equation simplifies further to:

The above equation is identical to the horizontal spring-mass result in Equation \ref{energy.SM}, as long as the displacement for the vertical spring-mass is measured from the new equilibrium position once the mass is attached to the spring.