Section 5.5 explains one application of Gauss’ Law, which is to find the electric field due to a charged particle. In this section, we present another application – the electric field due to an infinite line of charge. The result serves as a useful “building block” in a number of other problems, including determination of the capacitance of coaxial cable (Section 5.24). Although this problem can be solved using the “direct” approach described in Section 5.4 (and it is an excellent exercise to do so), the Gauss’ Law approach demonstrated here turns out to be relatively simple.

Use Gauss’ Law to determine the electric field intensity due to an infinite line of charge along the \(z\) axis, having charge density \(\rho_l\) (units of C/m), as shown in Figure \(\PageIndex{1}\). 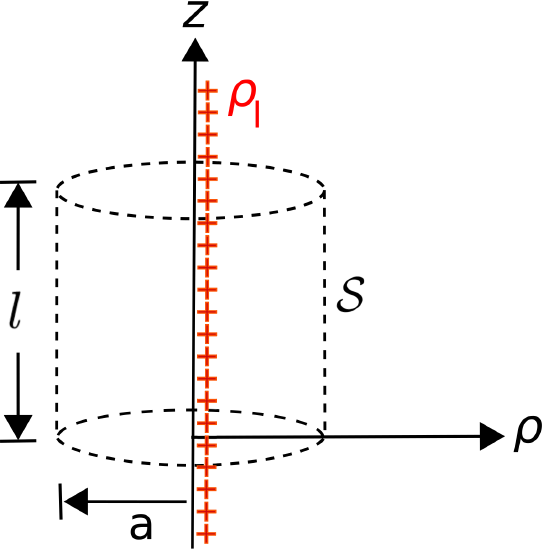 Gauss’ Law requires integration over a surface that encloses the charge. So, our first problem is to determine a suitable surface. A cylinder of radius \(a\) that is concentric with the \(z\) axis, as shown in Figure \(\PageIndex{1}\), is maximally symmetric with the charge distribution and so is likely to yield the simplest possible analysis. At first glance, it seems that we may have a problem since the charge extends to infinity in the \(+z\) and \(-z\) directions, so it’s not clear how to enclose all of the charge. Let’s suppress that concern for a moment and simply choose a cylinder of finite length \(l\). In principle, we can solve the problem first for this cylinder of finite size, which contains only a fraction of the charge, and then later let \(l\to\infty\) to capture the rest of the charge. (In fact, we’ll find when the time comes it will not be necessary to do that, but we shall prepare for it anyway.)

The first order of business is to constrain the form of \({\bf D}\) using a symmetry argument, as follows. Consider the field of a point charge \(q\) at the origin (Section 5.5):

The cylinder \(\mathcal{S}\) consists of a flat top, curved side, and flat bottom. Expanding the above equation to reflect this, we obtain

Examination of the dot products indicates that the integrals associated with the top and bottom surfaces must be zero. In other words, the flux through the top and bottom is zero because \({\bf D}\) is perpendicular to these surfaces. We are left with

Remarkably, we see \(D_{\rho}(a)\) is independent of \(l\), So the concern raised in the beginning of this solution – that we wouldn’t be able to enclose all of the charge – doesn’t matter.

Suggestion: Check to ensure that this solution is dimensionally correct.