Both the Klein-Gordon and the Dirac equation have a really nasty property. Since the relativistic energy relation is quadratic, both equations have, for every positive energy solution, a negative energy solution. We don’t really wish to see such things, do we? Energies are always positive and this is a real problem. The resolution is surprisingly simple, but also very profound – It requires us to look at the problem in a very different light.

Figure \(\PageIndex{1}\): A schematic picture of the levels in the Dirac equation 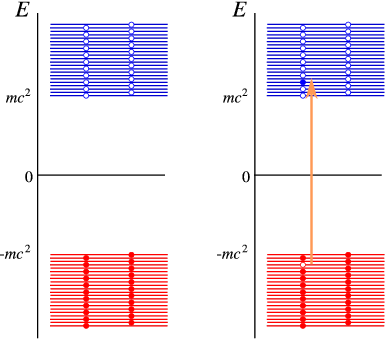 Figure \(\PageIndex{2}\): A schematic picture of the occupied and empty levels in the Dirac equation. The promotion of a particle to an empty level corresponds to the creation of a positron-electron pair, and takes an energy larger than \(2 m c^2\).

Note that we have ignored the infinite charge of the vacuum (actually, we subtract it away assuming a constant positive background charge.) Removing infinities from calculations is a frequent occurrence in relativistic quantum theory (RQT). Many unmeasurable quantities become infinite, and we are only interested in the finite part remaining after removing the infinities. This process is part of what is called renormalization, which is a systematic procedure to extract finite information from infinite answers!