We have discussed capacitors as theoretical constructs, but in fact they are common electrical components, used in many devices. One typical use is as a source of a “burst” of electrical energy that is stored when a voltage source charges it at its leisure, but then is unleashed more quickly to do some job that the original voltage source cannot supply so fast. We will see more uses as well, in a later chapter. To discuss capacitors in this practical context, it becomes helpful to introduce some symbolic notation. We start with four symbols:

Solid, unbroken lines that connect components represent equipotentials. These can consist of single lines, or lines that branch-off from each other. While it is usually harmless to do so, thinking of these lines as conducting wires in the physical world can sometimes be dangerous when they are first encountered, as we will use this same set of symbols later when we discuss electric current, where wires are not equipotentials. Also, problems are easier to solve if you keep in mind that everything connected by straight lines are at the same potential, rather than just a conduit of charge flow.

This is a component that facilitates talking about processes that involve connecting and disconnecting other components. When the switch is closed, it simply becomes an equipotential.

The symbol looks like the side view of a parallel-plate capacitor, but it can represent any geometry of capacitor, with or without a dielectric within it. Note that the connection of a "plate" with a straight line suggests that they are at the same potential (and they are), but because there is a gap between the two plates, they are of course not at the same potential. This is the first of many components we will encounter that generally involve a potential difference from one side to the other.

Up to now, we have talked about "holding a capacitor at a constant potential difference," while we do such things as pull the plates apart or insert a dielectric. We will no longer require this cumbersome language, as this is precisely the function of a battery. When charges move into or out of a capacitor, the potential difference (or voltage) across the plates changes, but the two "plates" of the battery shown in the symbol remain at the same potential difference at all times. If one side of the battery is connected by an equipotential to one side of a component, then that side of the component remains at the potential provided by the battery. If maintaining this potential requires charge movement, the battery supplies or accepts the charge as needed. [It should be noted that there are several symbols one may encounter for batteries. The '–" and '+' in the symbol shown are actually superfluous and don't always appear – the larger "plate" is always the one at higher potential. Also, a symbol with more than just two "plates" (alternating in size) is often used for a battery.]

In order to analyze these systems, it is useful to develop some tools for examining circuit fragments of multiple capacitors (each of which can have a different capacitance). The simplest such fragment is one in which they are connected "consecutively," as shown in the figure below.

This means that the voltage difference between the equipotentials on the two ends of the combination of capacitors is simply the sum of the voltages across the capacitors:

Whenever two or more capacitors are arranged in this way, such that they satisfy the above properties (the voltage across the combination is the sum of the voltages of each one, and the charges are the same on all of them), we say that these capacitors are in series. We have a total voltage difference for the combination, and a single amount of charge on a plate, so we can define an equivalent capacitance for the arrangement. Specifically:

Note that if there are more than two capacitors in series, we only need to add additional inverse terms.

It is not uncommon to mistakenly declare capacitors to be in series, simply because they "look consecutive," when in fact they are not in series. It is important to make sure that the criteria involving voltage and charge are in effect before computing an equivalent series capacitance.

Another basic arrangement of capacitors reverses the roles of charge and voltage, and is shown in the figure below. Once again the right diagram color-codes the equipotentials, and this time we can see that the two capacitors have the same potential difference across them:

As for the charge, each plate must get charge from outside (through the equipotentials), and different amounts of charge will go to the capacitors, and the total charge supplied to this system will equal the sum of the charges supplied to each individual capacitor. When these two criteria hold, we say that the capacitors are in parallel.

This is another warning about declaring two capacitors to be in parallel, simply because they look like it. The simplest test for parallel capacitors is to check to see if an equipotential directly connects both plates of one capacitor to the corresponding plates of the other capacitor.

For an equivalent capacitance, we put together the two new criteria, and get a new relation:

If there are more than two capacitors in parallel, then of course the equivalent capacitance is the sum of all the individual capacitances.

Show that for both the series and parallel cases, the energy stored in the equivalent capacitor equals the sum of the energies in the individual capacitors.

For the series case, the charge is the same on both capacitors, so the total stored energy is:

For the parallel case, the voltage is the same across both capacitors:

For the network in the figure, compute the fraction of the total energy supplied by the battery that goes to each of the individual capacitors. We will begin by calling the voltage across the battery '\(V\)'. It will divide out of the final answer, but we need something to put into the algebra. Now we begin the process of combining the capacitors to create a single equivalent capacitance for the network. 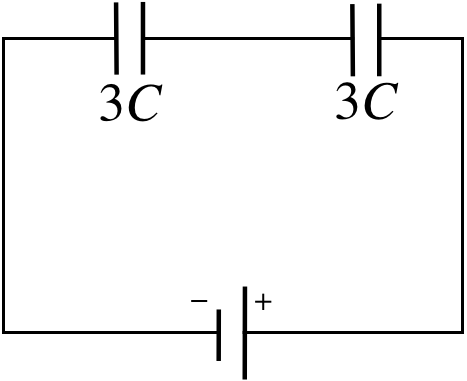 These capacitors are clearly now in series, so we combine them to make a single equivalent capacitor:

With a single equivalent capacitor attached to the battery, we can compute how much charge leaves the battery, and the amount of energy supplied by the battery:

Now comes the tricky part – the "unwinding." We start with the charge supplied by the battery. Whatever positive charge leaves the battery collects on the right plate of \(3C\) - it can't go anywhere else. This tells us immediately the voltage across \(3C\), and from that, the energy stored on it.

The equivalent capacitor for \(1C\) and \(2C\) is in series with \(3C\), so the sum of their voltages must equal the total voltage across the combination, which is just the voltage of the battery. Therefore, unsurprisingly, the voltage across equivalent capacitor for \(1C\) and \(2C\) is also \(\frac{1}{2}V\). The two individual capacitors in this parallel combination have the same voltage differences as the voltage difference of their combination, so we can compute the energy stored in each of these (we don't need to compute the charge on each capacitor, but we could easily do so, if we wanted)

The fractions of energy stored in each capacitor are therefore:

Note that these fractions add to 1, which confirms that the total energy that leaves the battery equals the sum of the energies in the three capacitors.

There are other applications of these tools that don't neatly fall into this template. These sorts of examples require some thought as to whether series or parallel applies. Here are a couple of the slightly-more-offbeat examples...

A parallel-plate capacitor with a vacuum between its plates is charged by connecting it to a 12V battery, and after it is fully charged, the battery is disconnected. Next an insulator with a thickness equal to half the width of the gap in the original capacitor is sandwiched between two thin conducting plates and is inserted between the plates of the original capacitor. After this is done, the voltage across the full system is measured to be 8.4V. Find the dielectric constant of the insulator.

a. The capacitance of the original capacitor is:

Treating the new configuration as three capacitors in series and computing the equivalent capacitance gives:

With the plates disconnected from the battery, the charge on the capacitor plates remains constant through this process (it has nowhere to go!). Setting the charges equal gives us a ratio of the before and after capacitances in terms of the ratio of the given voltages:

a. Start with the fact that both capacitors had equal charge, that we will call \(Q\). Then apply the fact that capacitor #1 stored three times as much energy:

When they are connected together, it is in parallel, because the plates of one capacitor are connected to their counterparts on the other capacitor with equipotentials. This means their plates are now forced to be at the same potential difference. Two capacitors with equal voltage differences will hold charges proportional to their capacitances:

b. We have the before and after conditions, and comparing them gives our answers:

c. Writing the total energies before and after in terms of \(Q\) and \(V\) gives:

The system drops to three quarters of its original energy, so it loses one-fourth of what it started with.